UN SECRETARY GENERAL, you are out of line…

Home / Εθνικό θέμα / UN SECRETARY GENERAL, you are out of line…

by Αδούλωτη Κερύνεια in Εθνικό θέμα

The U.N. Secretary General Mr. Antonio Guterres is under scrutiny by our Association, representing first /second and third generation refugees and displaced people from the occupied District of Kyrenia in North Cyprus. We find that he is out of line with respect to the Cyprus Problem. Not only our plight since 1974 is provocatively ignored by the Secretary General but in addition he makes recommendations which condone our ethnic cleansing and recognise rights on our occupied land to the embezzlers. This line of engagement by the Secretary General is in direct conflict with the provisions of the U.N. Charter. The parameters put forward by The Secretary General as a basis for new discussions are not legitimate, because not only they do not cover the need for the restoration of our Human Rights, they give priority on our properties to the current illegitimate user. This is a serious breach of the U.N. Charter.

As first generation displaced people, who seek justice, which shall quarantee our return and resettlement back on our land and in our homes, we worry and have every right, to demand by the Secretary General to pursue the justice we deserve and we are obliged to keep him in check. That is why, as early as June 2019, we warned him personally, with the following petition:ΑΚ184201918062019, ΥΠΟΜΝΗΜΑ ΣΤΟΝ ΓΕΝ ΓΡΑΜΜΑΤΕΑ ΟΗΕ

Equally responsible  for the U.N. Secretary Generals actions are, the  Governments of countries- permanent members of the Security Council. Therefore at the same period  the Governments of USA, France,Britain,China and Russia were petitioned via their Ambassadors in Nicosia with the following document ΑΚ186-1201918062019, ΥΠΟΜΝΗΜΑ ΣΤΟΥΣ ΠΡΕΣΒΕΙΣ ΧΩΡΩΝ ΜΟΝΙΜΩΝ ΜΕΛΩΝ Σ.Α.

So far we had no reply from any of the recipients. 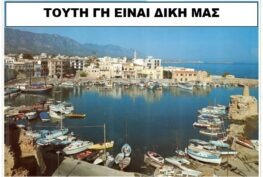 Your email address will not be published. Fields marked * are mandatory.